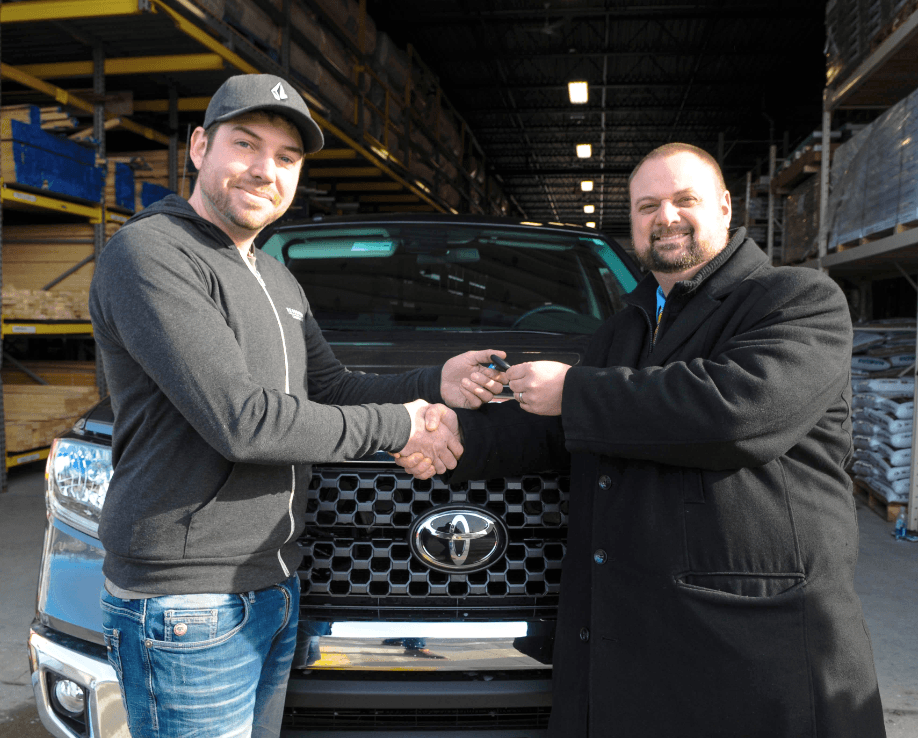 We are proud to announce Stephan Henderson of Henderson Construction in Port Hope as the winner of a brand new 2018 Toyota Tundra 4×4.  The contest put on by Home Hardware was for contractors across Canada, and Stephen was the lucky winner.  “When Brian from Gilmer’s Home Hardware in Port Hope called to tell me, I thought he was kidding around”  says Stephen, “He is that kind of guy and we have a lot of fun….I really still can’t believe it”  The new truck arrived in January and was picked up  soon after.  “It’s really exciting, the Tundra is an awesome truck, and we were able to get it in dark grey, which is Henderson Construction preferred colour”, said Vandermeer Toyota Sales Manager Derek McDonald who was on hand to pass over the keys “It really could not be going to a nicer guy, Stephen Henderson is  a true gentleman”  Keep an eye out for the truck around Cobourg and Port Hope, Stephen will be the guy driving with the huge smile.  And check out their website to see some of the amazing projects they have been working on www.hendersoncarpentry.ca  In  group photo left to right are Paul Hutchison (Toyota Canada)  Robert Glecoff (Cobourg Home Hardware Building Centre, Manager), winner Stephen Henderson (Henderson Carpentry), Brad O’Neil (Dealer Owner of Cobourg & Gilmer’s Home Hardware Building Centres), Brian Amos (Gilmer’s Home Hardware Building Centre, Manager), Derek McDonald (Sales Manager, Vandermeer Toyota)